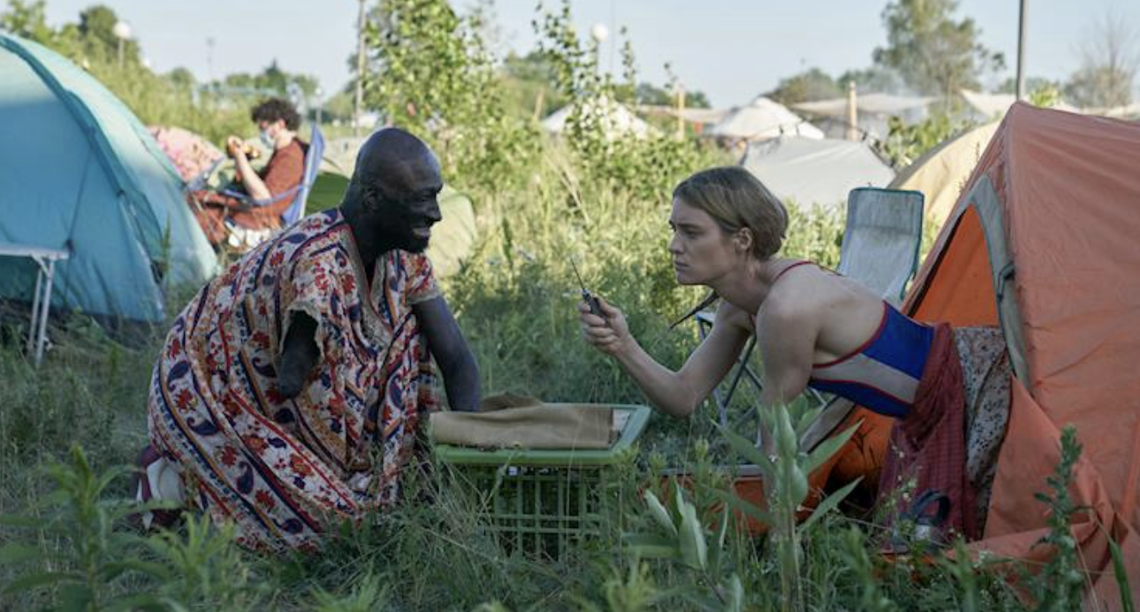 Based on the 2014 novel of the same name, Station Eleven follows the survivors of a devastating flu who attempt to rebuild and reimagine the world anew while holding on to the best of what's been lost. Steve Cosens is the cinematographer behind four episodes of the HBO Max series.

Steve was excited to be a part of this project and had the pleasure of shooting episodes 2, 5, 9, and 10. In episode 2, Steve introduces the audience to the post-apocalyptic world for the first time in the series. Steve shot his episodes on an Alexa Mini, and used gorgeous vintage style lenses by both Blackwing and Masterbuilt.

In an exclusive interview with ProductionHUB, Steve talked about working on the series and how he achieved visual cohesiveness with the other DPs on the show.

PH: Hi Steve, how are you? Can you start by sharing a bit of your background in the industry?

Steve Cosens: I went to Emily Carr College of Art and Design in Vancouver and studied film/video. It was a school that really honored process and risk-taking and I would say that those two fundamentals are part of my creative DNA that I take into everything I shoot. I was directing and shooting my own experimental films and soon people started asking me to shoot their film projects as well. By the time I graduated I had already begun to feel that cinematography was where my passion lied. When I got out of school I shot anything I could including karaoke videos, music videos, documentaries, low budget features. I eventually moved to Toronto and really hustled and my career took off just because there was so much going on. I was the new kid in town but I was also so inspired and charged up.

PH: What were some of your motivators to become a cinematographer? If you had to choose a few parts (or a few) of the job, what would it be?

Steve Cosens: I just simply love telling stories with images but also early on I realized that I loved the collaborative aspect of film-making and I love that part of the process where it's all about jamming on ideas and world-building and bringing something to life from nothing. I love being on set but I also just love hunkering down and dreaming a film into existence with the director.

PH: Your latest project is Station Eleven. How did you come to work on it? What enticed you about it?

Steve Cosens: The scripts, by Patrick Somerville, were beautifully written and the world on the page was so engaging and because quite a bit of the story takes place in the future it felt like a particularly potent blank canvas I was being handed. All of the key creators involved from Patrick to Directors Jeremy Podeswa and Lucy Tcherniak were all people I was excited to work with and in my initial meetings with Jeremy, it was obvious that this show was being guided by some really inspired and inspiring individuals who were deeply into making some art.

PH: What was it like building a post-apocalyptic world? Was it something you'd already given thought to?

Steve Cosens: I had always wanted to shoot something that was post-apocalyptic because of course who doesn't want to dream what that world looks like. Once I got into pre-production and started to see what Patrick and Ruth Ammon (the production designer) had been imagining I was thrilled to see that the vision for the future was not typical, was not foreboding - nature was not burnt out and unsurvivable but instead nature was lush and alive and to be embraced and engaged with. There's a great quote that you see and hear in the show and that is "Survival is Insufficient". I love this quote and it was sort of my mantra in that the show is about the rebuilding of human culture and my own focus was always about how can I help build the world of Station 11 so that it becomes exceptional.

PH: Let's talk about shooting in Canada. What was that experience like?

Steve Cosens: Well, I'm a born and bred Canadian and I'm really happy to be working here in my own country. I'm proud of how we've grown and evolved as a film community here in Toronto and we have so many talented world-class creators living here. This crew was loaded with great people who worked hard and delivered a very logistically challenging show in the midst of the worst of the pandemic and we had fun doing it so that says a lot.

PH: The series also features Shakespearean plays, a large abandoned airport, etc. How did you bring all of those elements to life?

Steve Cosens: There are some great set pieces in this show and for a DP it was so much fun. From an aesthetic point of view, I would say that my cinematography for the show no matter what the location was rooted in naturalism - trying to use as much natural light or available light and non-film lights as possible. I'm a fan of sparse lighting so I spend a lot of energy manipulating, softening, cutting natural daylight and in prep, I work to make sure that, as much as possible, scenes are staged in the right direction for me so that the sun or shade works in my favour. I wanted the cinematography to have an organic quality to it in that I didn't want it to feel too slick or flashy so for the most part I embraced what was there as much as I could. Don’t get me wrong - there was a lot of lighting going on at times but whenever I could I would use existing practicals and available lighting in any given space. I like the authenticity or truth that can come with using existing lighting because you don’t mess with the vibe that already exists in that space.

In the airport I played a lot with the mixed lighting of daylight, tungsten fixtures, and slightly greenish-white industrial fixtures. The airport was so much about the 100’ long banks of windows and really it was like shooting an exterior location in that when the sun got low or went down and we ran out of light, the day was done. Of course, we were strategic about how we structured our days in terms of day vs night scenes and where those scenes were blocked out. When it came to the Shakespearean plays at night I was really pushing that we shoot these with as much firelight as possible and thankfully we did. We plumbed gas lines all throughout the stage and I had total control of all the flames we see on camera. I could sculpt light on actors' faces by raising and lowering the quantity of any given flame on the stage or I could kill all the offscreen flame behind camera to create contrast and focus etc. Ruth was critical in helping me achieve this look and she did a beautiful job of integrating all the fire into the sets.

PH: Readers may have already envisioned a version of this "world" themselves. What are some of the challenges of developing something like this? How do you manage expectations in a way?

Steve Cosens: To be honest I couldn't get too caught up in thinking about other people's expectations based on the book. Once I started Patrick's scripts I was pretty much engulfed in the world he had laid out on the page and it quickly became "this is amazing - now how are we going to pull this off!” The show was basically a big roadshow for most of the time with a large crew constantly on the go to new locations so there was always a lot of talk about how we were to fuse the demands of the creative with the demands of the logistics. Ruth was the real driving force behind maintaining the look of year 20 and she fought hard to have things like locations with real cracks in the road with real weeds and trees growing out of them instead of something artificially or digitally created.

PH: What was it like shooting on the Alexa mini LF?

Steve Cosens: We shot on the Alexa mini LF and it's a camera that I really love because of the beauty of that sensor and of course the image science. We had the camera on a Ronin (operated by A cam Sasha Moric) a lot of the time so the slightly smaller size and compact design was also favourable to us.

PH: Can you talk about some of the vintage-style lenses you used, and why?

Steve Cosens: We shot with the Masterbuilt lenses and the Tribe 7 Blackwing lenses. For the most part, I shot most of the show on two of the Blackwing lenses because I loved the texture and soft drop-off around the edges and their ability to render creamy images. Bradford Young really managed to create a lovely line of lenses and they totally hooked me.

PH: There are other DPs working on different episodes. How did you ensure visual cohesiveness? Is there an easy way to do this?

Steve Cosens: This was the first time I shared DP duties and I was nervous at first because I didn’t know how it would go but Daniel Grant and I had a very easy collaborative exchange of ideas on a continual basis. I think just the fundamentals of good clear communication and respect go a long way towards building on ideas with another person and that’s exactly how we operated. Often I’d be heading home groggy in my car at 5 am and Daniel would be on his way out to set somewhere else groggy in his car and we’d commune over our victories and defeats, talk about missing our kids, and share intel. Daniel did beautiful work as did Christian Sprenger. I have to give a shout out to our Colourist Cody Baker who did lovely subtle work in helping us visually anchor a show that moves back and forth across time so much.

Steve Cosens: I’ve got something that’s in the works that has me psyched up right now but I can’t share quite yet. That’ll have to wait till our next conversation. 😃