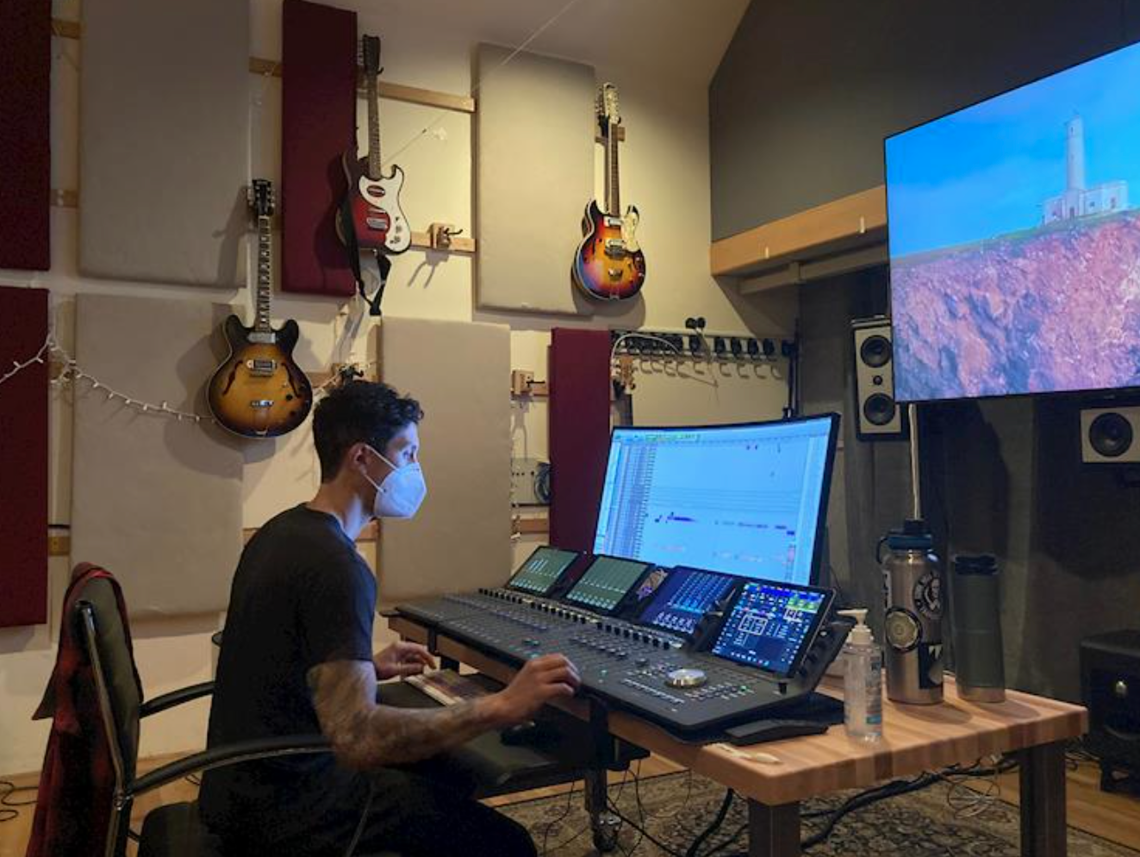 How are recording studios are functioning safely throughout the pandemic? San Francisco based recording studio Decibelle has been helping artists make sure they can continue to record their music in a covid-safe faculty. Built in Noe Valley in the mid 70’s and acquired by Pollen Music Group in 2006, Decibelle can be used for making and scoring music for streaming, broadcast, and theatrical productions.

Scot, Alexis, and JJ of Pollen are known for their work as a composing group on animation and VR content. Pollen owns and operates Decibelle which previously hosted recording sessions with the likes of The Dead Kennedys). Since Covid hit, Pollen remodeled Decibelle in order to make it safer and to continue to use their studio throughout the pandemic.

PH: What's Decibelle and how did it get started?

JJ Wiesler: Decibelle is located in the old Mobius recording building in San Francisco's Noe Valley district. Mobius. Built in the 70s, the studio was a at the epicenter of the Bay Area for decades. In 2007, I took it over and started Decibelle to continue in the tradition of Mobius. This year, during the pandemic, we are taking the opportunity to build out a new chapter for the studio with new capabilities.

Decibelle also serves as the headquarters for Pollen Music Group as well as Pollen Audio Group. Pollen is a full service music production company and multi-disciplinary team of audio researchers, data scientists and audiophiles all under one roof. On the music side we score TV/Film and immersive projects. Recent work includes Netflix’s Trash Truck, where we did the full audio pipeline: custom score, sound, and mix. We also worked on Baobab’s Baba Yaga which will premiere at Tribeca this spring. The Audio Group has worked with companies like Google, Apple, Portal, Adobe and Unity to bring our deep understanding of spatial audio to their products and user experiences.

PH: What does Decibelle offer?

JJ Wiesler: Decibelle is a traditional recording studio and now a post facility as well. We offer services like album tracking and mixing, as well as score work for small ensembles. We offer mixing as well as audio post from stereo up to Dolby Atmos for home entertainment and Dolby Atmos for Music. The latter is an area we are really excited to focus on. We are in the process of mixing a record for Pebble Theory and targeting a summer release to coincide with the stereo release.

PH: How has the past year changed the way you operate?

JJ Wiesler: Well, pretty drastically in that we had to close the doors to recording sessions. We were pretty booked up in April/May of 2020 and we had to call all the artists and explain we were going to cancel. So we immediately went about the remodel that was almost more of a 2-3 year goal previously. We reached out to our friends Mark Roos at BBI Engineering (www.bbiengineering.com), and Adam Shalleck at the Shalleck Collaborative (https://www.shalleck.com) for some ideas on how we could build an Atmos stage in the live room without disrupting the integrity of the room as a recording space. They helped us realize our vision of a “pop-up” mixing stage that could be set up and broken down within an hour by 1 person and offer a no compromise midfield Atmos mixing stage. We ended up with a 7.3.4 system. The LCR speakers are Barefoot MM27s and they are on a track that allows them to slide out of the way. The surrounds and subs are by JBL and they stay in place along the wall and don’t intrude on the space in any way. They just fit in with all the music gear around. The room is full of drums, guitars, amps, pianos, etc anyway so they just fit right in.

PH: What precautions are in place to ensure the safety of everyone in the studio?

JJ Wiesler: We installed better ventilation to make sure air was moving as it should and HEPA filters that were adequate for the air volume. We made sure there were lots of hand sanitizer dispensers. And then limited the session times and attendance to be safe. Taking breaks, wearing masks. Everything that all small businesses were trying to do. We reopened for our first session in December of 2020 which was a surround mix for a soon to be released project by animator Erick Ohh and that was engineered by one of Pollen’s sound designers Andrew Vernon.

PH: Can you talk about some of the projects that have used Decibelle for their recording needs?

JJ Wiesler: Over the years, Decibelle has been a hub of the record making scene in San Francisco. We’ve hosted bands and artists like Jonathan Richman, Matt Nathanson, Incubus, The Magnetic Fields, and Chuck Prophet. Since reopening in December, we’ve completed a number of projects. We did the surround mix for two projects by Baobab Studios. One of which is called Baba Yaga which I mentioned before. The other is not yet announced. We completed a project called Valley of the Lost Girls, an indie film by a husband and wife team who chose Decibelle for its ability to safely host both of them and their newborn. They came up from Southern California. That project was mixed by a great engineer named Tony Vilaflor. On the stereo side, we mixed the upcoming release by local singer singer writer Scott Gagner and Pollen’s own Alexis Harte. Alexis made a short film for his single Thirsty which also got invited to premiere at Tribeca. So we are proud to have two projects bound for that festival this year. For some of these sessions we had to limit the amount of people in the space for COVID safety so the director would dial in. We used a platform called soundwhale, which is sort of in Beta. They were very responsive and helpful making sure everything worked. I like their system because it allows the high def video to live locally on the remote machines and the studio is only broadcasting an audio stream and a sync signal.

PH: Lastly, what does the recording process look like at Decibelle? Can you walk us through it?

JJ Wiesler: Well it’s pretty typical. On the recording side we have a API console, lots of outboard and 32 i/o ProTools system. One unique approach is that in general, I try to leave as much set up and mic’d as possible. So tracking drums does not include hours of set up. If you want grand piano, you just enable those tracks. It comes from the composer side of me that just wants to get the idea down. And also years and years of setting up and breaking down sessions. There’s no need to zero out the studio every night when for the most part its going to get set back up. It creates a sound for the studio. The drums are there in a place where I know they sound good. The Hammond, pianos, guitars and basses are already ready to go. I think Motown studios was a bit that way, which is part of why those records all have “a sound.” Of course much of that has to do with the players and the writing, but from a studio POV, I don’t think they were setting up and breaking down every session. They left things as they were for the next session. On the Atmos side of things, the stage is also pretty much ready to go. For many of Pollen’s projects where we are involved in score as well as post, we are jumping back and forth between the rooms. The Atmos system is a new Mac Pro and Avid S1 controllers with an AVID Dock. The interface is an Avid Matrix Studio which is a great interface. I love that it has built in speaker tuning and bass management as well as all the i/o one needs for an Atmos setup. It would be nice if it had a second Dante port so you wouldn’t need a supplemental interface to satisfy the Dolby certification requirements. But...for the most part, its pretty amazing how much is packed into one interface.

JJ Wiesler: It’s now February and there are signs that maybe 6-12 months from now we can all participate as usual in sessions. I am really looking forward to that as the social aspect of sessions is really a big part of the process. The joy of creating something together, going into the control room to listen back. It’s the reason dedicated recording studios are so important and such an inseparable part of the records we know and love.

PH: How do you think recording studios will operate in the future?

JJ Wiesler: This year has provided lots of opportunities to develop remote systems. I think some of that might stick around. It really is useful to be able to collaborate or participate remotely when logistics are too expensive or schedules preclude all being together. Like with everything we’ve learned this year, I hope some things go back to the way they were, but we are able to keep what we’ve learned and add that to the process.

Why are entertainment platforms livestreaming on TikTok?