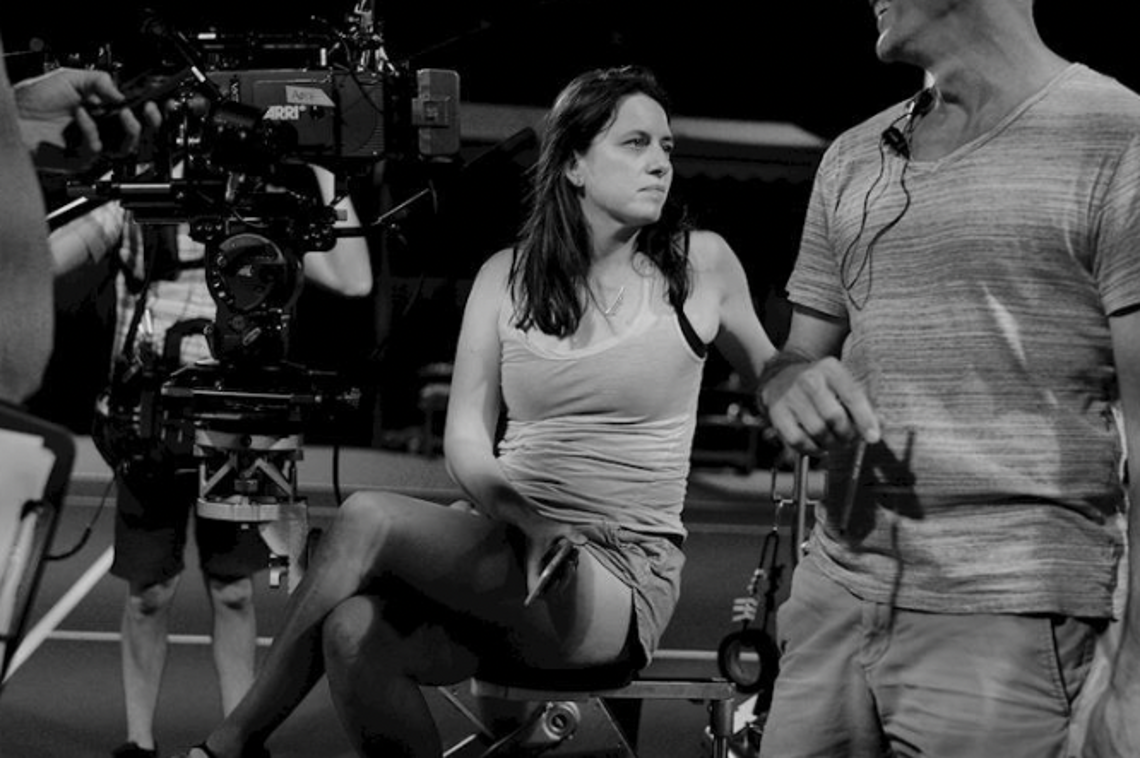 Cinematographer Amy Bench just recently finished working on three independent films Mama Bears, Shouting Down Midnight, and Lover, Beloved, all of which were featured in the 2022 SXSW Film Festival.

Amy specializes in working on various documentary-style films that bring awareness to pressing issues within the realm of social injustice. Her work on Mama Bears tells the story of Christian mothers who provide constant love and support, as well as fight for the rights of those in the LGBTQ+ community despite the teachings of their church.

She wanted audiences to better connect with these women by keeping the film set in a darker tone and really playing around with the different aspects of lighting. Amy also worked on a project titled Shouting Down Midnight which fights for reproductive rights in women and she relied heavily on the storytelling to drive the overall tone of this project.

In addition to documentaries, Amy also worked with director Michael Tully on a narrative project called Lover, Beloved, where she was tasked with finding new, dynamic ways of adapting a stage play into a feature film. They started by playing with different vintage gels and lenses to help accentuate the time period of the 1940’s, as well as the transition from day to night in various scenes.

PH: Hi Amy, how are you? Can you start by sharing a bit of your background in the industry?

Amy Bench: Yes! I work as a cinematographer and director, and have been doing both for about 15 years. I started shooting in graduate school and fell in love with the process of capturing motion. Cinematography has been my focus the last 15 years, and about 5 years ago I started directing again.

PH: What were some of your motivators to become a cinematographer?

Amy Bench: I was always very curious as a child- very observational and wanted to record things visually. I was also quite a perfectionist, strong in math and science, and it took me a long time to give in to my artistic impulses. Filmmaking is actually my second career- I first started off as an engineer, my first job working at Eastman Kodak company. While there, I learned a great deal about imaging science, gaining a technical appreciation for how images are made. Simultaneously, I dabbled in photography and took a few art classes at The Rochester Institute of Technology, a renowned art and photo school. One of my art professors, Clifford Wun, assigned a storyboarding exercise and I fell in love with the sequencing of images.. After 3 years at Kodak I decided to enroll at The University of Texas at Austin, where I received my MFA in Film Production, with a concentration in directing and cinematography. I haven’t looked back since!

PH: Can you talk about your passion for various documentary-style films that bring awareness to social injustice issues? How have some of your most recent projects tackled issues like this? (can you share a bit about some of these projects)

Amy Bench: When I was in college and in the years after I was a bit of a social activist. The impending war in Iraq triggered that activism. I worked on registering voters and other social justice campaigns for a group called Metro Justice. As a filmmaker, that activism has been partially through media. As a female filmmaker, part of me naturally feels like an activist, advocating for myself to compete in a very white, male industry- gladly the industry is opening up a bit though my participation in it - in addition to my passion for imagemaking still feels very intentional and in some ways revolutionary.

Mama Bears tackles anger and misunderstanding rooted in misinformation and a closed upbringing. It’s a story of love and acceptance, led by a group of moms who formerly misunderstood and questioned their LGBTQ kids. Michelle Obama, when she was leaving office, famously talked about why representation matters. She said, “For so many people, television and movies may be the only way they understand people who aren’t like them.” And I think that’s why films about a host of social justice issues matter- at the heart of it, these are stories about people who are undergoing hardship or whose rights are being taken away- yet if we show these people in a light that’s dignified- it will allow others to understand and appreciate our differences.

PH: How did you get involved with projects such as Mama Bears and Shouting Down Midnight?

Amy Bench: Daresha Kyi reached out in 2017 with the idea for “Mama Bears”, and I was completely drawn in. Given that I’m based in a fairly conservative state, and grew up in conservative communities, I knew how important a film about Christian conservative mothers embracing their LGBTQ children could be- and this is way before the recent, more direct attacks against queer and especially trans youth. I liked Daresha right away- she was smart, dedicated to the story, and the fact that she singled me out after seeing a short documentary I worked on (“An Uncertain Future” by Iliana Sosa and Chelsea Hernandez) was especially touching.

Daresha reached out about her idea for the film before she had funding, and it surprisingly took some time to raise money for the feature. In the meantime, Daresha was commissioned by the ACLU to direct a piece on Kimberly and Kai Shappley- that film is called “Trans in America: Texas Strong.” That film was released in 2019 and was an immediate success. Lives are still transformed by the film. And- it was the seed that opened the path to making Daresha’s longer work, “Mama Bears.”

For Shouting Down Midnight, I had worked on the topic in 2013, as I was at the Capitol during Wendy’s filibuster in 2013, equipped with a small Canon 5D Mark II, which had come out a few years earlier. I was one of the women that Wendy inspired into activism- in my case, using my skills as a filmmaker to contribute to the reproductive rights movement. When I heard about Gretchen Stoeltje’s film, I instantly wanted to work on it- and ultimately the footage that Kate Robinson and I filmed at the Capitol that summer became incorporated into Gretchen’s film.

PH: What goes into choosing what projects to work on? Why were these special to you?

Amy Bench: Firstly, there needs to be a connection with the director. I find, though that when people reach out about a project it’s usually because they responded to my previous work- so that connection is usually there off the bat. For me that’s the most essential- the film can be any topic, any genre, but if I have a good connection with the director and the material is interesting, that’s usually the driving force behind jumping on a project.

PH: What have been some of your more challenging roles—and why? How do you address those challenges? Speaking of challenges, in Lover, Beloved, you had to find new, dynamic ways of adapting a stage play into a feature film. What was that experience like? How did you tackle it?

Amy Bench: I came on a few weeks before production, so prep was very accelerated. He had done a fair bit to condense the script a bit for timing, and had started working with production designers Lisa Laratta and Bart Mangrum to build a series of sets. We filmed in a large open space at the Austin Film Society cinema- essentially a big black box with a beautiful stage. The budget allowed for 5 distinct sets, and as they were being built we pored over the script to figure out transitions- movement, lighting, or both- to get Suzanne between those different sets.

I also world with Gaffer Eric Gerzymisch to develop different lighting plans for each scene- so that even if we visited a set 2-3 times during the film, there would be something unique happening visually, specific to that scene. It was also a collaboration with the production designers- how do we incorporate lighting into the production design itself. We even shot a couple of Suzanne’s songs- including “Instant of the Hour After” and “New York is My Destination”- between different sets, using a piece of it for context and grounding, but creating a whole new environment with in-set lighting.

PH: What goes on in your mind before you start shooting? What did ideation and pre-production look like?

Amy Bench: Figuring out the tone is one of the first things I like to discuss with the director, and looking at source imagery together. With Lover, Beloved, since our pre-production period was so short, it was making decisions quite quickly and sometimes changing things up as we were filming. There is a lot of sketching of ideas. Open communication between all the creative departments to make sure we’re approaching things from a common perspective. Talking through ideas with different departments can lead to fun innovations and use of materials. In a project like this, that is so theatrical, the collaboration between departments was key to pulling it off.

PH: After years in the industry, what are some of the biggest lesson(s) you've learned?

Amy Bench: This industry takes a tremendous amount of patience and thick skin. I’ve learned to become good at working on both small teams and larger ones, and to float between the two quite easily. It’s also one where the technology and resources available are always evolving- so it’s fun to explore new tools as they come along.

PH: In your opinion, a great cinematographer has to embody what characteristics/qualities?

Amy Bench: I think being able to complement the director’s approach and adapt your style in ways that best fit the story and still feel natural to you. I think the cinematography should always serve the story.

Amy Bench: Sure! I have a few projects in the works as a DP, and another short doc I directed that’s on the festival circuit. I am working on a documentary about book banning, directed by Kim A Snyder, that should be out later this year. Texas is leading the charge with more books banned than any other state, so it’s important that this film get released before more damage is done. I’m also working on an LGBTQ-themed doc directed by Julie Cohen. Additionally, I have a film I directed out on the festival circuit called “More Than I Remember,” a story about a young Congolese girl fleeing violence, the search for her family, and finding home. It’s part of an ongoing short doc series I’m directing about people seeking refuge in more stable lands. It premiered at SXSW and just won Best Short Doc at The Cleveland International Film Festival.

You may have seen Amy’s work on previous projects like Loves Her Gun, The Golden Rut, Holy Hell, and Bad At Dancing. She also worked as the cinematographer for Trans In America: Texas Strong which won a 2019 Emmy Award, as well as two Webby Awards for Documentary Winner and People’s Voice.