The Art of Pivoting & Why It's Critical in Production 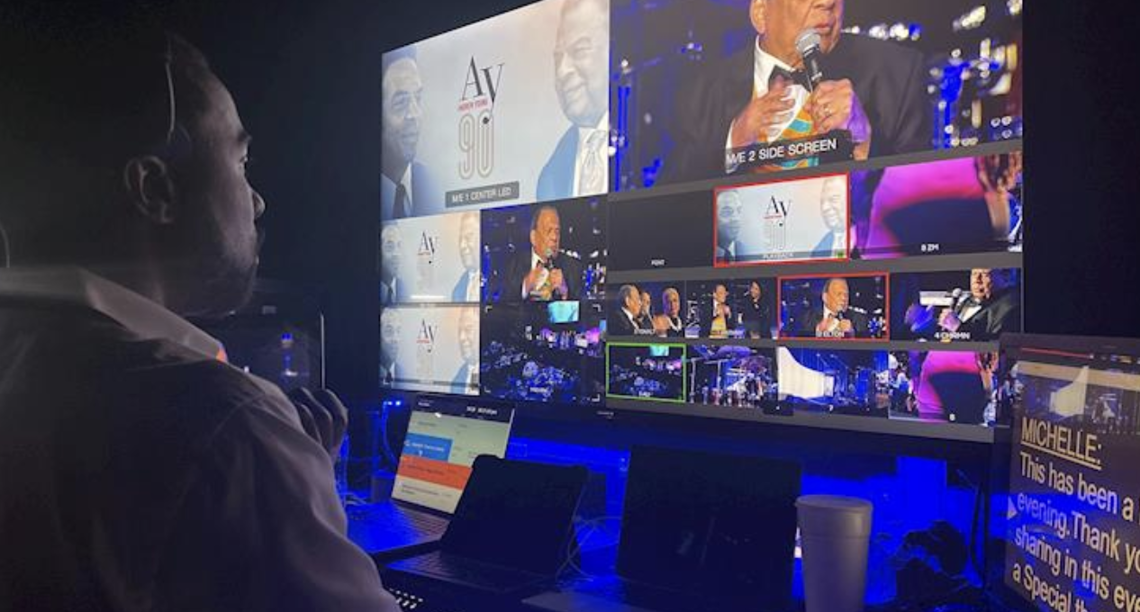 Despite many things we have in common (including where we were raised), I’ve never met Tre James, the dynamic creative behind Production Rockstars.

Tre, being a seasoned live production pro, drops a ton of knowledge he shares freely with you in this article. When ProductionHUB’s Mark Foley suggested Tre kick off our new Q&A series, I jumped on the opportunity to interview the live production rockstar himself.

As a VOG, I’m constantly in awe of live event producers and their almost inhuman calm in a sea of chaos. It’s magic how they weave so many different moving parts into a cohesive whole without losing their minds.

Tre’s story illustrates the importance not only of learning and working your way up, but also of the drive required to make a living in production.

KB: As a kid, what did you want to be when you grew up?

What was the defining moment you decided to go into production for a living?

Tre James: When I was about twelve, a guy who worked with my mother was starting a youth choir, and he was looking for a drummer. We were invited to perform on a public access TV show called “People TV.” I was supposed to be playing drums, but I got distracted and wound up spending the entire night in the control room.

So, I started talking to the people at the TV station. By the time the night was over, I remember introducing my parents to the lady who was working there, and she was telling me they had a program where you could come in and take classes on TV production. I spent the entire summer at that TV station. Her name was Alexandra Overton, and we got to be friends with her.

My mom would take me to her house each morning so I could ride with her to the TV station and stay all day long. At the time, Shirley Franklin was the Mayor of Atlanta. Once, we went to an elementary school where she was speaking, and I got to shoot and interview the Mayor.

The genesis of a lot of what is behind my work in production happened that night at the TV station, and I spent a couple of years there. It was a relationship that came out of that TV station that blossomed the rest of my career.

KB: What qualities and skills are required for success in live event production?

If I ever write a book, it'll be called The Art of the Pivot, because that's literally what live production is. The art of pivoting constantly.

People say things like, “You're always so calm when things go wrong.” It's because I've been doing this so long, and I'm not just a producer. I'm an actual engineer. I've been a stage hand. I've done everything. I know all the work arounds. If you freak out and you lose yourself, it'll cascade. Things are going to happen, and you just have to pivot.

KB: What is your title?

Tre James: I am the 100% sole owner of Production Rockstars, but I don't really use the title owner.

You can always tell people, “Hey, I need to go check with the owner,” and then go check with yourself. Sometimes, I assign myself in the director role on shows where people will just hire me for their projects as a director.

Within my company, I executive produce, and I'm the executive in charge of production. That means that I build the team out. When we take on a project, I'm the one who hires the team that's going to work with me to pull it all together.

KB: How did Production Rockstars come to be?

Tre James: I’ve been using the name since 2013. I didn't come up with it. I used to post all my work on Instagram, and one of my homeboys, David Dorleans said, “Are you a production rock star?” And I was like, “I like that shit.” That's where it came from. I read it under a post one time.

KB: What have been your most effective marketing efforts?

Tre James: Being authentic on LinkedIn and Facebook is key. Your network is your network. This is a who-you-know, business. You’ve got to be good, but it’s still who you know.

I was looking for customers, and I was looking to meet more crew people across the country because I was doing shows in different markets where I hadn’t worked before. I started by typing in “VP of production” on LinkedIn, and then I added a bunch of VPs and would talk to them.

I am really good about just posting my stories and content on LinkedIn. Instead of trying to directly sell to these people, I just figured I would make sure that they were in my network so that they would have a better chance of seeing my content. It has worked amazingly well.

Pretty much everybody in my network works in television, so they’re either an employee, a potential employee, potential customer, or both.

Facebook is how the Grammys project happened. It's a dude who I've been friends with on Facebook, and we’ve only spoken a few times over the years. One day, he hit me up and said, “I got a show.” Two weeks later he said, “I need you to direct the Grammys.”

I directed and produced “Recover Out Loud” for Google last year. It was the same thing. They saw me on Linkedin and reached out. That’s how I got it.

KB: How do you stay calm in the storm of live event production?

Tre James: I know how to pivot. I surround myself with really smart people. I'm big on the planning phase. What does yelling do? I might be stressed in my head, but I don't panic. I'm not a panicky person.

Everything is going to be cool. I stress to everybody, “We’re human.”

KB: Who is your inspiration?

There’s one person who is responsible for my career: Chet Brewster. I met Chet working as a stagehand on shows where his company was doing video production. Chet started hiring me to work with the video team and then I’d work as a stagehand when the show was over. When I was in 11th grade, Chet brought me in to do the Trumpet Awards which I did for 9 years. I wound up tech managing the BET hair show for Chet.

While on another show, I met Justin Budd. I hired him as a camera operator, and then he hired me to come in and tech manager for the Kevin Hart “What Now” pre-show in Philly where he introduced me to Valerie Benning Thompson who I still work with today.

KB: What are your creative outlets outside of work?

Tre James: I read every day; articles, business books, autobiographies, you name it. I don’t read books on production, but I love to read. I also love to ride horses. That’s my thing. I’m always down for travel.

KB: What was your most awkward moment at work?

Tre James: When I was young, I was working at New Birth church, and Patti LaBelle came to play the Easter Service. While she was performing her wig came off. Her stylist was adamant that I go out and get it so he could put it back on her head. I was admonished for it. They said, “We only tell the stories. You’re never supposed to be part of the story.”

KB: What do you say to people who want to go into live event production?

Tre James: I would tell you how to stop going to College-stop wasting money they're not teaching you with real-world information. I highly discourage it.

Everybody wants to be in live production, but the hustle is sold separately. You got to hustle. You’ve got to stand out.

You will never be a good producer unless you are a good PA. Everyone wants to move up after 6 months as a PA and I say, “You haven't been in enough adversity and in enough situations to have the wherewithal to be a producer or director yet. There is no shortage of creative ideas. There is a shortage of people who know how to execute.”

Don't rush the process. What will happen is you'll fight your way up to the top and at some point, you will be exposed for what you don't know.

Be willing to learn, take in everything and study. You’ve got to put the work in, learn and be dedicated to this.

Live production is not like any other kind of production. It's not film. It's not post. It's very demanding.It’s very rewarding. It's not for everybody. Mix and mingle in every department to figure out exactly what it is that you want to do.

KB: Anything else you’d like to add for ProductionHUB readers?

Tre James: Yes, two things: Be authentic to who you are. Everybody plays this safe. I'm open with my clients. Be authentic to yourself. Be true. I’ve found that has worked amazingly for me.

We're building a studio in Atlanta, and we’re about to have a lot of training video opportunities coming. We’re really looking to grow by leaps and bounds over the next year.

Actually, there’s one more thing. It’s a challenge and a charge to this entire industry. There has to be a focus on diversity. Yes, we need more diversity. We really need to reach out to a new generation of people. It is incumbent on all of us to pull up and raise the next generation. And not just people that look like us, but people that look different from us, people who have never been exposed to these opportunities. That’s a very big mission of mine. I'm all about the most qualified people, but we'll never be qualified if we're never given the opportunity.

KB: Where can people find you?