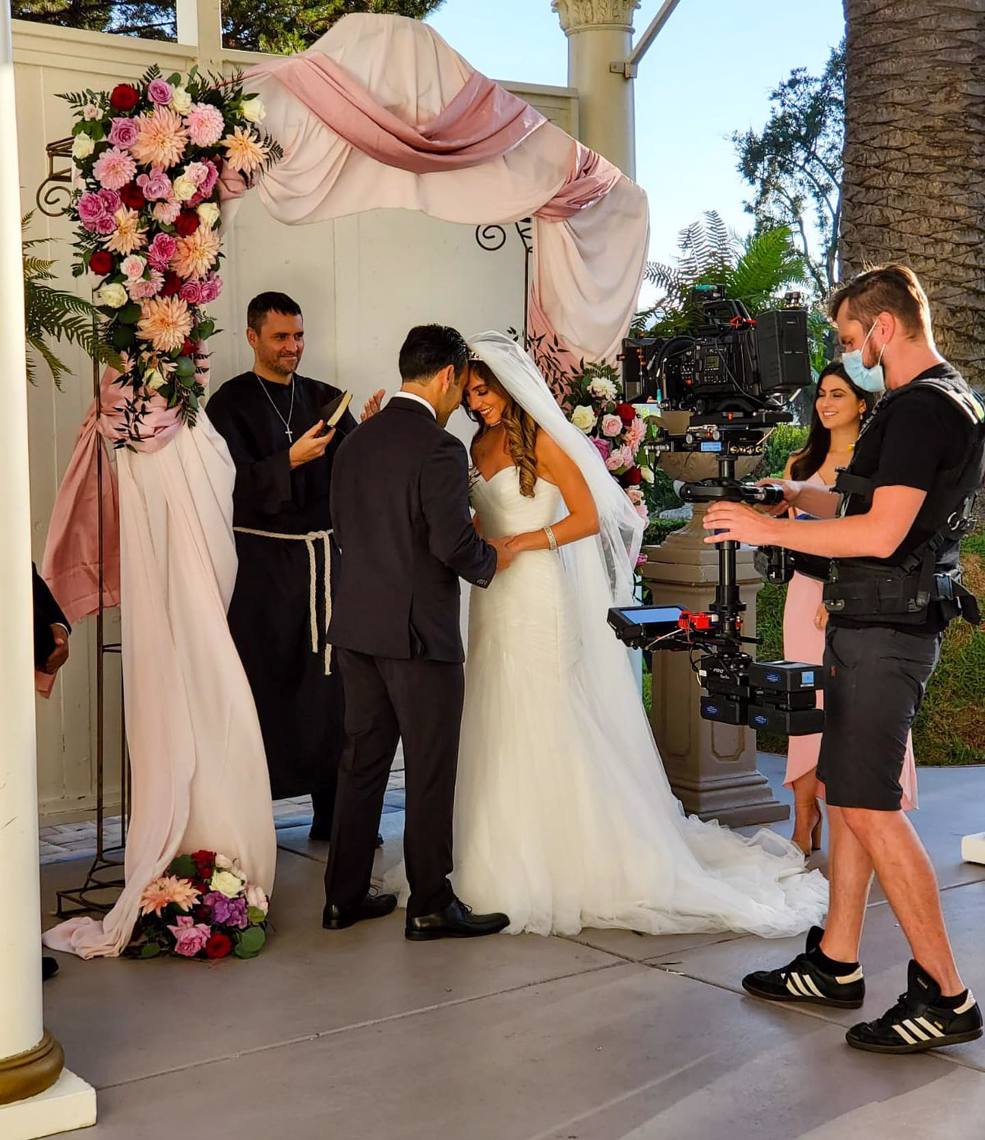 A few facts to set the scene

This is how we made Pride Jewel, my first feature film.

Okay, for transparency: there were 3 days where we brought on a grip to help our gaffer, and 3 other days where we hired a Steadicam operator, so our camera department ‘bloated’ to 2. Lastly, we did 4 days of pickups (landscapes, transitions, inserts, etc.) with an even smaller crew.

So now that you know the basic scenario, here are some strategies for a successful shoot with 1 person in every department.

A successful indie shoot starts before you write “Fade In”

When working with such a small team, you have to be ruthless about following the standard low-budget filmmaking advice. The “right” script is one that you’re passionate about and contains the lowest possible number of:

Locations Speaking parts Background talent Picture vehicles Animal actors Makeup and special effects Etc. (As noted in the intro, we only did a mediocre job of following this wisdom.)

But can you turn a lack of options into an advantage? Because you can’t even entertain the possibility of big spectacle, you get to be laser-focused on the relationships between characters. And that’s ultimately what audiences care about anyway.

As Craig and John talk about on the Scriptnotes podcast (shoutout!), even big action / sci-fi movies end with a “Love you, bro.” scene after all the battles and explosions have stopped (although we’re getting more non-bros now too!). Imagine a superhero movie where the final battle is the final scene! As the last robot / alien / monster / evil AI / generic baddie falls, we roll credits… how unfulfilling would that be?!

Let’s jump back to our “facts to set the scene” section and add one more thing: a list of the crew positions / departments that we did not have:

HMUA (with the exception of 2 days) Script supervisor Assistant director Production designer Prop master DIT Wardrobe Supervisor As we all know, nothing can replace an experienced crew member who’s great at their job. So let me be clear: you should hire these people as often as you can.

But just because you don’t have a dedicated brain for each one of these roles doesn’t mean you don’t have any of that knowledge on set. Well-rounded crew have learned from their collaborators on previous projects. The following things happened during our shoot, all of which contributed to getting the movie made:

Actors gave other actors makeup tutorials Our location sound mixer pointed out continuity problems We were all the assistant director by committee – if someone had a lighter day in their role, they took on more of the AD duties The venue contact at our wedding location put us in touch with a horse and carriage for the grand entrance of the bride and groom Our key PA organized props and wardrobe in addition to everything else he was asked to do Everyone slated at some point (even the DP did it once, using the clapper with one hand while hitting record with the other) But all this is only possible if you have experienced crew members and actors. Easier said than done, right? That’s why a clear, compelling vision for your movie is so important – to help inspire people to join your team. And once they’re on board, it’s equally important to treat them with respect and express your gratitude as often as possible.

Plus food and coffee. Always.

This concept applies broadly, but I’ll start with one specific area of pride – that we managed to have no major continuity errors (not sure we had any minor ones either) even though we didn’t have a script supervisor, a dedicated props person or a dedicated wardrobe person. We accomplished this through scene breakdowns, which were delivered with the sides for each day.

In pre-pro, we diligently broke down each scene in our script software, Celtx. Every prop, character outfit, story-critical set decoration, picture vehicle, blood effect, animal actor (and any other crucial item) were tagged in the script. The software could then auto-generate a list for each scene, and actors were responsible for getting their own wardrobe and props out of the van. While it’s never ideal to distract your actors from their characters, we made it as clear and simple as possible, and it felt like the right balance for our project in the end.

Another example of this “more time in pre-pro” concept:

There are 2 competing ideas in filmmaking, both of which hold great appeal:

1– “Finding it on the day” – the idea of not setting your plans in stone, and allowing spontaneity and freedom to play a role in how you block, shoot, light, and act a scene. This usually includes input from the actors about where they’d be and how they’d move in a space.

2– “Seeing your movie before you shoot it” – the idea of pre-visualizing the film as much as possible before you get to set, so that you know exactly what’s going to work.

The latter is typically connected to big VFX-heavy films, but I’d argue that it’s also the way to go when you have extremely limited resources and team. For example, one great lighting person can accomplish a lot when things are planned out ahead of time and they can grab a few extra connectors or pins to quickly create the rig that’s needed. The same is true for blood FX, stunts, optical tricks, etc.

Don’t get me wrong – we all need to keep our eyes, ears, and hearts open to the magic that presents itself during a shoot, but don’t let the possibility of a spontaneous moment be an excuse for being underprepared and not having a plan in place to start with.

Use the small crew size to your advantage

Filmmaking is full of contradictions. It’s a business, yet it’s art: it’s technical, yet creative: it’s collaborative, yet thrives on a singular vision: it needs to be planned meticulously, yet requires us to change directions on a dime. And the list goes on.

But that last one – the need to change on a dime – is what makes your 1-person departments so powerful (yet another contradiction). When an opportunity or obstacle presents itself, it takes almost no time at all to communicate the new plan to the entire set. And company moves are infinitely easier when everything is contained in just a few vehicles.

Small sets can do things that bigger ones can’t. So, with your base plan firmly in place from pre-pro, take advantage of those last-minute finds. For us, that included a back-lit wooded path, a car that had been stripped for parts, and a very friendly police officer who was willing to park his patrol car in the background of our scene.

Tools are cool, but who will use them?

I love everything about filmmaking, including the gear. But I do have to remind myself that it’s possible to shoot an Oscar-winning film on an iPhone – and I really believe that. Technology has gotten to the point where a pocket-sized camera can do incredible things, and if I’m not happy with what I’m seeing in the monitor, it’s on me and my team – not the equipment. This is even more true with a skeleton crew. Extra gear and larger gear quickly become more of a burden than a benefit.

One time I was planning out a short film with a DP and I said something to the effect of “The main character crosses, and then we’ll pan over and see the other person.” and he said “Well, I don’t know if we’re going to attempt a pan…”

I almost thought he was joking at the time, but now I know what he was getting at: filmmaking naturally swells in size and complexity, so you have to be vigilant about keeping it as small and simple as you possibly can.

If that feels too limiting, think about what a director like Stanley Kubrick could have accomplished without panning. Or what the Dogme 95 filmmakers have achieved inside of their self-imposed restrictions.

Given longer setup times, what will you be doing with those extra moments?

While I believe you can move quickly with a small crew by planning in advance, let’s face it – having 1-person departments means that there will be some longer setup times for bigger scenes. And that’s fine – you can make an educated guess as to which ones those are, and factor that into your schedule.

That happened on our shoot, and we had more-or-less accounted for it. But I have to admit that I fell a bit short in this regard – I hadn’t thought about how I would use that extra time. There are always multiple demands on the director’s time, and a big part of being successful in that job is knowing what needs your attention, and what can be delegated.

So in pre-pro, or maybe just the night before each shoot, spend some time thinking about which element of each scene or shot will require your individual attention. Most often I turned my attention to the actors, and we would squeeze in a rehearsal, or talk about how one particular line was setting up another moment later in the script, etc. But other times, I specifically wanted to leave the actors alone, and then I had to figure out how to most effectively use those minutes.

By the way, this problem is significantly alleviated if you have an AD on set, because that person will usually be great at prioritizing for you. So maybe the upshot of this section is to squeeze an AD into your budget.

With clever planning, modern tools, and a focus on what really matters in movies (the relationships), I believe a tiny team can make a great movie. What other tips would you add?

And, did we pull it off with Pride Jewel? Check out the trailer or stream the movie on Amazon.

We all want more resources, bigger teams, and higher budgets. But those things only come if we do the best possible work with what we have this time around.

Whether it’s filmmaking, or any other endeavor in life: here’s to a tight group of people working together to become more than the sum of their parts.

Doug Thomsen is a director and production company owner at BT Studio. When he's not working on a film or commercial, he's watching cinema in all its forms with his wife and cat, going on hikes, and furiously adding reminders to his Google calendar. The end.