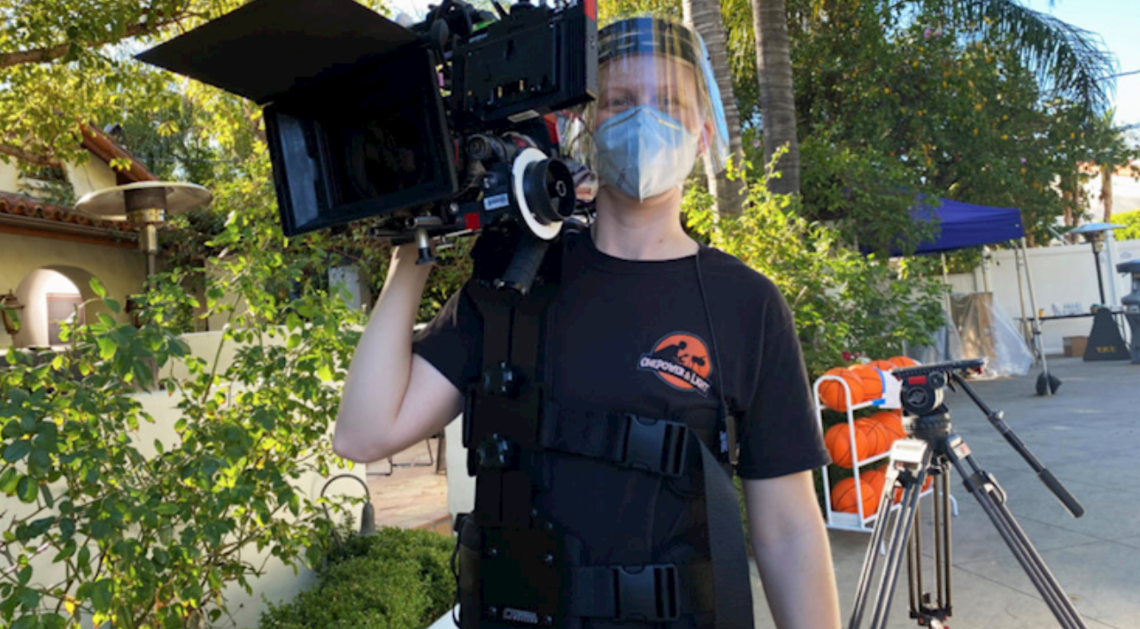 Lilly Singh is a comedian, talk show host, and actress, who rose to fame as a YouTube star in which she chronicled her thoughts and daily activities. In 2019, replacing Last Call with Carson Daly, NBC released A Little Late with Lilly Singh, which recently started its second season. Ditching the traditional television studio, the daily half-hour talk show is produced at a house in Los Angeles following production protocols and safety guidelines relating to the COVID-19 pandemic. The show is shot by Director of Photography Carissa Dorson (It’s a Party, CollegeHumor) with a mix of AU-EVA1, LUMIX GH5S, and GH5 cameras.

In September 2020 – while in quarantine – Dorson shot Singh’s NBC sketch comedy show, Sketchy Times with Lilly Singh, before moving on to shoot A Little Late with Lilly Singh. According to Dorson, the format for season two was similar to Sketchy Times in that it resembled some of Singh’s YouTube content, as well as being set in a house rather than a studio.

“Almost every episode has a monologue, which we call ‘rants’ because it's just Lilly in a room by herself speaking to a Vlog style camera,” said Dorson. “This is what she does best and it's really funny. There are other segments that are more behind-the-scenes based in which she's talking to her writers. There are also a lot of interstitials where she's just walking around the house and having fun with the crew, who are often featured on the show.”

NOT YOUR TYPICAL TALK SHOW According to Dorson, much of the show’s look is based on giving Singh room to shine as a performer. “Where I bring my aesthetic in is for all the sketches that we create,” said Dorson. “If we're doing a parody, I can lean into that look a bit more. We did a horror sketch the other day where Lilly turns into her uncle, which is her worst fear. It was a werewolf parody so I got to play and bring in a different look that included dolly zooms, dutch angles, and lightning effects.”

Dorson shoots the entire show with three EVA1 cinema cameras, two LUMIX GH5S mirrorless cameras and one GH5. Two of her EVA1s are the A and B camera and her third C camera is used for wide shots. She uses her GH5S cameras for different purposes, including mounting one on a DJI Ronin-S gimbal, and one exclusively used for Singh’s rants. Dorson takes advantage of the GH5S' Dual Native ISO technology, as well its auto-focus capability.

Dorson captures Full HD (1920 x 1080) resolution at 23.98-fps. With the EVA1s, she captures 10-bit 422 ALL-I files and with her GH5S and GH5 cameras, she captures 10-bit 422 LongGOP. Because of the show's quick turnaround, she does not record V-Log but instead bakes in her look. “We don't have any color grading at all so it’s been a learning experience,” revealed Dorson. “I chose Scene File 1, which has more of a Rec.709 look and I dial the blacks down a bit to create more contrast. I also have to dial in unique tints and color temperatures for each camera.”

“We did some tests beforehand,” continued Dorson. “I was able to choose picture profiles for the GH5S and EVA1s that matched as best I could. On the GH5S, I'm using the standard picture profile with the saturation and contrast dialed down. There are certain segments where we're pairing the two cameras together and to my eye they're matching pretty well. The GH5S really holds up to the EVA1, even though it's not considered a cinema style camera. It looks really impressive.”

For lenses, Dorson employs Canon CINE-SERVO 17-120mm T2.95-3.9 EF zooms due to their flexibility. “The lenses just save a lot of time because they can be wide and close up for any situation,” she said. “I also like the look, especially when paired with 1/8 Black Pro Mist filters.” For the GH5S and GH5 cameras, Dorson uses LUMIX 12-35mm zoom lenses.

WORKING SAFELY A major section of each episode is Singh interviewing a celebrity guest on a couch. Due to COVID measures, Singh conducts interviews remotely on Zoom and the guest appears on a large television monitor in the “living room”. To make the Zoom call look visually interesting, Dorson creates mixed coverage for the editors. She captures a wide shot of Singh and the television screen and employs handheld cross-shooting of Singh and the large monitor by her B-Cam and C-Cam operators (Will Sampson and Chris Oeurn).

“It’s basically an over-the-shoulder of the TV and over-the-shoulder of Lilly,” explained Dorson, “and in the edit, they use the Zoom recordings to sometimes go full screen on the guest. The recording of guests always varies based on their setup and we give them guidelines when it comes to lighting. I'm still in the process of streamlining the guidelines.”

For lighting the living room, Dorson uses a combination of soft sources and LITEMATS rigged to the ceiling for backlight.

Dorson’s lighting team consists of gaffer Joe Baltazar, key grip Rene Yescas, and swing Katie Blanch. Dorson likes using large source lights and silks for soft complimentary lighting on Singh, as well as a couple of LITEMATs rigged to the ceiling for backlight. She also uses ROSCO DMG Lumière LEDs. “The DMG SL1 Mix and Mini Mix Lights are thin, versatile, and perfect for adding a pop of color in the background.”

Producing a daily late night talk show during a pandemic has obvious challenges. For the production, a COVID officer is always on set. People working in Zone A – basically anyone working inside – needs to be tested on set every day. “Our safety officer is really good at making sure to remind us to stay six feet apart from each other whenever possible,” said Dorson. “Each room in the house has a maximum number of people and we have signs up saying how many people can come in.

Dorson capturing Singh with a GH5s on a Ronin-S gimbal. (Photo by Matthew Misisco/NBC)

“It does go a little bit slower,” continued Dorson, “because hair and makeup might need to come in for a touch up and that might mean somebody else needs to leave. Another example is our lighting team will be setting up so camera team can't come in yet. It takes more organization because of that.”

So far, Dorson has been very impressed with the look of the show. “The cameras have been very flexible due to their small size, which helps our small crew. Our one AC/media manager, Iliana Ipes, does a great job juggling all of the cameras and footage,” explained Dorson. “The GH5S is perfect for running around on a gimbal, and for our rant camera in which Lilly is alone in a room talking to the camera. The EVA1s and GH5's make a good compilation of cameras that fit all of our needs.”

It’s All In the Mix: Getting Your Sound Right

The Future of Production Services: What to Consider When Hiring Crew in 2022